„The Causes and Consequences of Berlin’s Rapid Gentrification“ 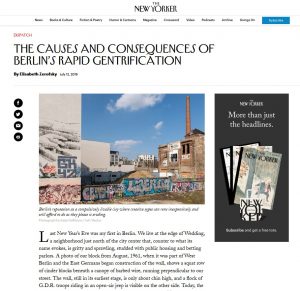 „The pattern—drill, tag—had been stamped, Warhol style, across the entire façade. Gaedtke held his arm out directly in front of him, demonstrating that all the puncture marks were at hip height. “As you can see, they are all done on a level where it’s easy to drill,” he said. “That I find pretty funny. It’s like they’re not even trying.” Shortly afterward, the company informed them that the façade was now more than ten-per-cent damaged. “Yeah, I wonder why,” he said. They would need to modernize it. The rents would rise accordingly—by nearly fifty per cent. (A lawyer for WIBE declined to comment.)“

This entry was posted in General. Bookmark the permalink.